Resilia Solutions > Blog > How can city administrations better cooperate with citizens?: A case for in-house intermediaries*

European, regional and local public administrations are increasingly facing budget cuts. Yet, these concern mostly their internal budgets and affect in particular their human resources: the pool of employees decreases whereas the amount of work remains the same or increases. This is particularly the case with the rise of citizens’ initiatives, transition processes and movements, and new (co-creation and participatory) governance methods, be they top-down – inscribed in strategies – or bottom-up – led by spontaneous grassroots movements. At the same time, the financial package available for contracting increases: it is not so much for questions of legitimacy or transparency that authorities contract more and more some tasks of public service delivery. Rather, it is due to the fact that certain tasks cannot be carried out internally: either because of a lack of internal capacity or the fact that these (new) tasks are not inscribed (yet) in new strategies and cannot be managed by someone from the administration. What are some of the consequences of contracting service providers for such projects? 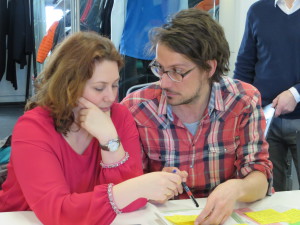 The organisation being contracted also – and generally – tends to behave as a “contractor”:

However, another approach is increasingly used by public authorities: that is to internalise the public service delivery related to the implementation of projects. It is borne by the neighbourhood managers in Ghent (BE) and Amersfoort (NL), or to some extent by street educators in Brussels (BE), is sometimes referred to “Street level bureaucrats” in the literature (Agger and Poulsen 2017). We will call them “in-house intermediaries”. Who are they? Administration’s employees who deal on daily basis with target groups (e.g. citizens) and their projects. They have various professional and personal profiles: they can be with or without prior working experience in the administration, they are of a wide range of ages, they have a university or vocational background and/or an experience as grassroots activists. Their selection, and way of working, is based on their individuality and personality. They have to be open and curious; to be able to network, moderate, mediate and negotiate; to possess a political sensitivity; to act fast and be creative in identifying (human, financial, technical) solutions; to stimulate and lead processes (URBACT REFILL Network 2017). They work partially on the ground, partially in the offices of the administrations. They are the key connection between what is happening on the ground and in the administration. They benefit from the insight from the field work, with empathy and in-depth knowledge and understanding. At the same time, they know the rules and functions of the administration and provide the immediate feedback for making the public services evolve. In sum, they are “inside out” as François Jégou would say.

Adopting such an approach implies for the administration to face directly the –non-evitable- issue of conflict: of interests, agendas, strategies, priorities, or emotions. The in-house intermediary is at the heart of these clashes, which is a hard task. Yet, as such a role exists, it forces the administration to identify a solution. Such conflict which is part of the daily life of the in-house intermediary therefore provides the energy for progressive forms of collaboration (Agger and Poulsen 2017).The administration also gains in efficiency as the information is available in-house and dealing with a problem is done within its own structure.

At first sight, such in-house intermediaries are however not a panacea. Installing such a scheme might depend on the geographical scope of the area covered. Their role might be dedicated to specific topics, or one employee could be affected to such a role in each relevant unit. Their recruitment and the way they operate can be very evolving: even though they operate under a strict framework from the administration, their autonomy is their freedom as well as their main constraint: they need to operate very independently and to find their way through. In some instances, this might create a difficult balance between the different hats they possess and the legitimacy they possess towards both their employer and their target group. Yet, this requires a change of posture in the role that the administration plays in delivering public services, as it forces the administration to go beyond its traditional neutrality and to act as full societal stakeholders, involved in public agenda setting and implementation.

How can a city move towards a more engaged and direct way of delivering such public services? One low-risk approach is to start by testing out this scheme. To go on the ground and experiment some ways of interacting at the same time as collecting feedback on the needs, perceptions and expectations. Such an approach can go along with the lines of testing out new ways for solving problems with local actors (Agger and Poulsen 2017). This can “easily” be done for example with the recruitment of a skilled and well-briefed trainee. Another approach is to recruit a sort of “experienced community manager” who would work closely with the administration, not as a provider with a client, but in a partnership mode. This second option though might trigger issues of public procurement as mentioned above. Finally, a lot of such public service delivery goes hand in hand with a good communication and transparency: for all the parties to be honest and straight to the point, to express wishes and fears, limits and possibilities but also to look for solutions together. This should be the basis for a more advanced and integrated form of implementation of public service delivery.

*This article is based on: