How come some spaces bring about a sense of legitimacy, welcoming feeling and invitation? Which systems can combining freedom and trust, to provide space where we are allowed to test, expand and open ourselves to others? What are the ingredients enabling to learn from one another and reduce the boundaries between social groups? These were some of the questions that guided our exchanges during those two days. 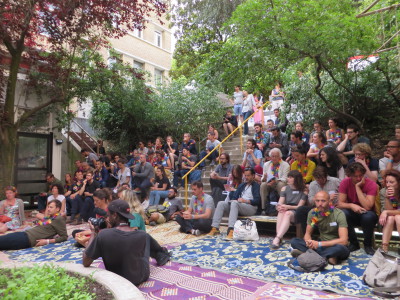 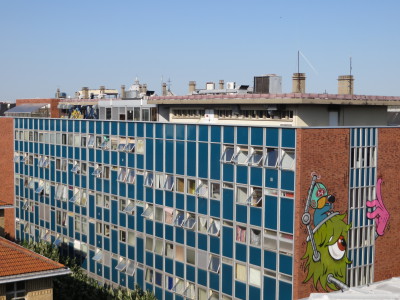 The lower floors are dedicated to emergency housing, the upper ones to working spaces

“Doing by the narrative and not with millions of euros” (Nicolas Détrie, Yes We Camp)

That is what les Grands Voisins has been doing for a year and a half: the site of the former Saint Vincent de Paul hospital was meant to remain empty during 5 years before an econeighbourhood would be built. It became a bedtest for social integration, urban experimentation, and new business models. Altogether, these are 20 000 squared meters of outdoor space and 15 000 of indoor space that nested and inspired this prototype. A consortium of three organisations agreed with the Local City Council to implement this project: Aurore refurbished indoor spaces creating 300 beds for emergency housing and 300 for workers’ dorms; Plateau Urbain re-affected some other interior spaces to offices and co-working areas; Yes We Camp created outdoor activities: a camping, a bar, a restaurant. The site also hosts some artists’ shops, a ressourcerie, urban gardens, chicken…

”It’s as if it were done the hoof, but actually it follows very strictly the rules” (Prune Gasnault, Cabanon vertical)

At first sight, a visitor would be unsure about the way Les Grands Voisins reclaim the space. Yet, the project is going on following very strict rules, notably ensuring the safety and security of the site. More generally, it ensures (good) cooperation with public authorities. Indeed, participants to the Forum Camping underlined the importance of taking into account the legal and material risks, getting access to an insurance, ensuring political support,… Nevertheless, for many, fitting to the legal framework often remains a DIY process: you need to identify the space in the law and existing regulations for such use. Fair enough, the French experiences witnesses many possibilities: “authorisation d’occupation temporaire”, “bail”, “prêt à usage”, … [1] That is the reason participants claimed for the creation of “Code of the Common” that could support cooperation with public authorities in addition to the identification of useful legal resources… 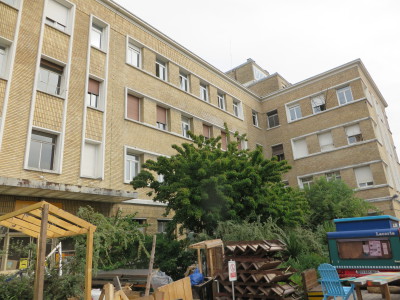 The messy aspect of some parts of the site does not preclude the fact that it is safe and secure. 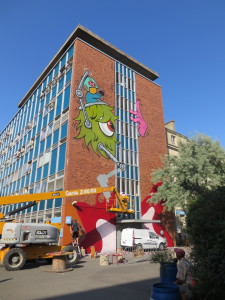 Reaching the end of the experimentation, a street art festival is organised at les Grand Voisins.

“Our project worked out because we knew how to communicate” (Aurélien Gaucherand, Darwin)

Indeed, communication is key to make the message visible – first step – and then come across to the right stakeholders – second step. The team in charge of the Darwin project in Bordeaux actually used its own skills as a communication agency. More than that, they used the local agenda and timing (elections) to arrange press conferences when in need of public reactions. In terms of visibility, Les Grands Voisins were also very cautious: no graffiti were tolerated on the site. They could easily get rid of the first ones they would identify (one graffiti quickly leads to a bunch of them) and the fact that there was always animation helped it out. The site had to remain clean, with the feeling that someone was in charge. Only at the end of June, they organised a street art festival on the buildings that would be destroyed.

Consultation is the Vaseline of permanent project (Philemon Gravel, Entremise)

The statement is harsh. Yet, this is what happened with the experimentation of Les Grands Voisins: although a consultation for the site was carried out before the project of the econeighbourhood on the site was agreed, the project was launched after this agreement. The room for inputs from the two-year experimentation is now limited as the urban plan already is fixed. Beyond the temporary experimentation of Les Grands Voisins, couldn’t such projects contribute to the actual making of the space? Shouldn’t consultation become “consult’action”…? 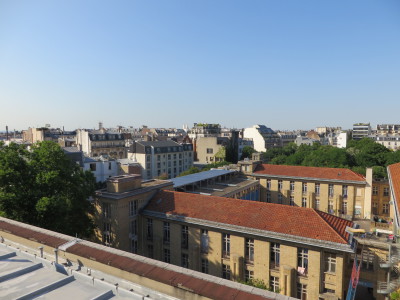 One building currently used for emergency housing which will be renovated and will remain in the econeighbourhood.

“The State vouches for the commons” (Regis Ursini, Urbios)

Beyond this plain and quite obvious statement, it appeared that the “commons” are being understood at two levels. At the first one, this is about defining a common space. The exercise carried out during the Forum Camping identified the following characteristics: there is a space with an inside and an outside; it proposes activities that are free and open to the public; experimentation is easy: there is room for unexpected effects; it reveals what there is already; it enables sharing and capitalising on know-hows; it works on the basis of collective governance; it is independent from public and private actors. In addition, it can be the ground for local micro economic experimentation and host artists and residences.

At the second level, we reached a more conceptual exchange on the operationalisation of such a paradigmatic shift. Participants were certainly abiding by the new societal models based on Hardin’s, Ostrom’s, Laval’s or Bauwen’s writings on the Commons. Yet, how can the work on public space reshape the relationship between all actors of society and readjusts the responsibilities borne by each, under the responsibility of the State? How to tackle the tragedy of the commons? One of the answer to this question was to start agreeing on a definition and ensuring that new concepts are made mainstream without losing their initial meaning… Not an easy task…

The real life is here, it is not just a temporary use 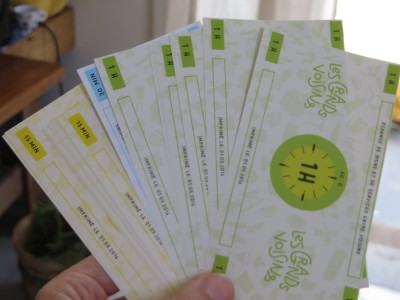 The local currency based on quarters of an hour.

One of the emblematic project of Les Grands Voisins has been the creation of a local currency based on quarters of an hour: the people living on the site can receive them in exchange of some service they deliver. They can use this currency in some specific shops on the site. The experimentation is altogether economic (assessing the value of money and time), social (valorising time and individual skills), and environmental (through circularity). More than that, it has been a societal experimentation: about the way collective and individual needs, interests and potentiality can come together in a complimentary way. The major side effect was the creation a micro society bound by this currency, creating a new local urban ecosystem.

And that is one of the landmark reflexions of these two days: les Grands Voisins and other projects which were present at the Forum Camping  are all concerned with fluid processes, social experimentations, which should be open and leave room for creativity. They underline the role we, citizens, all have of being space makers. In doing so, personally, professionally, we develop a new urban value which is liquid: it can spread to all spheres of public policies and society not only in a transitory manner but for long-term effects as well. 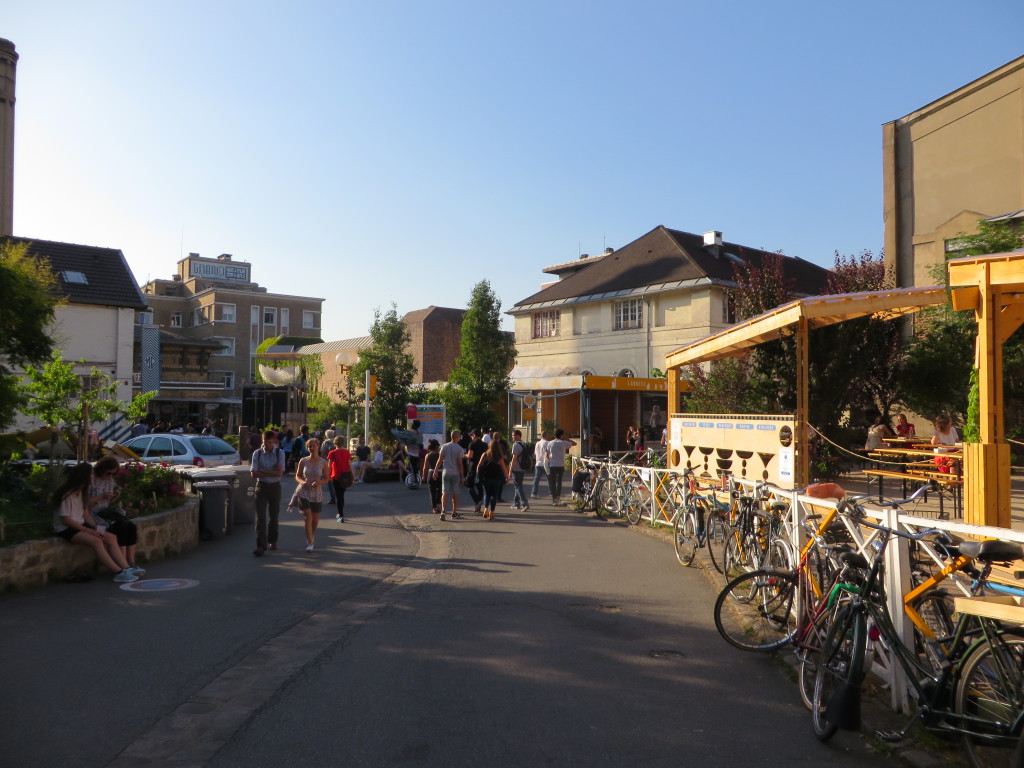 [1] For more examples throughout Europe, check out the  Issue of the REFILL magazine: https://refillthecity.wordpress.com/media/magazines