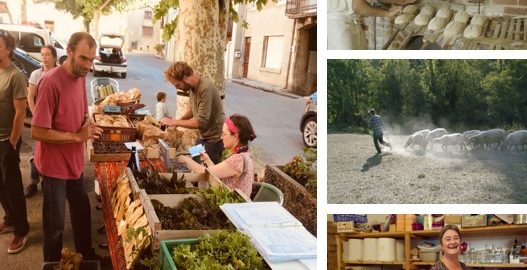 In the 800-inhabitant city of Piegros-La Clastre, after the local farmer, Cécile Grigoryev Anciant decided to stop delivering her weekly vegetable boxes, a citizen, Eric Escande, decided to take over the lead to collect orders from citizens interested in her weekly products. From vegetables, the scheme started proposing fruits, dairy products, meat and bread, under a snowball effect and without any particular promotion, except for the weekly distributions on the main square of the village. The scheme has been a success since the beginning, with a weekly 500-euro turnover and 130 families signed up. The voluntary aspect of it (enrolling 30 people) makes it an alternative to other paying schemes predominant in cities such as La Ruche Qui Dit Oui.

Since 2008, local producers sell their products under a cooperative, Brins de Terroir, labelled under Terre d’envies, promoting collective selling points. Today, around 40 producers of fruits, vegetables, meat, dairy products, preserves, drinks as well as local craftsart, occupy a former train station in Vaunaveys-la-Rochette to sell their products directly to consumers: half of them are associate producers. The contributing producers work in shift in the shop together with two employees. The strategic location and opening hours (on Sundays and bank holidays) have contributed to the success of the shop with an annual turnover of circa 850 000 euros.

The two Communautés de communes (Local Federation of French municipalities) Val de Drôme and du Crestois et du Pays de Saillans, together with three NGOs CIVAM, AgribioDrome and Court Circuit, launched in 2015 a collaborative process to co-create the food policy of their area. A first phase (2015-2018) inaugurated the governance model of the five organisations together with initial definition of actions under three axes: awareness-raising and food outside home; transformation, distribution and logistics; networking between local stakeholders. In a second phase (2018-2019), workshops have brought together citizens and stakeholders to identify the issues that were of importance to them, seeking to move away from the initial agricultural focus to a food one. Grouping them by target groups (children, youth, elderly people, precarious groups), the work has then carried on by the types of activities that could be implemented while prioritising them. This work is also based on learnings from other experiences throughout France and Europe, with an objective to co-implement and co-monitor food actions with all stakeholders.

“BioVallee”: an NGO for the sustainability of the territory

BioVallee© is a project and trademark to make three Communautés de Communes (Val de Drôme and du Crestois et du Pays de Saillans, and Diois) a responsible, innovative and alternative rural metropole whereby sustainable development is at the heart of human, agricultural, economic and cultural activities. It seeks to conceive, identify, promote and upscale sustainable practices accessible to all via cooperation tools such as the Trademark BioVallée ©, a website, a sustainability self-assessment grid, networking of its members, thematic workshops, interviews, access to call for projects, a funding programme, an observatory and a charter. Initiated by Drome Valley ( and supported by the two others Communautés de Communes, the project has been delegated to an NGO, funded by them. Amongst its objectives, the project aims to reach 50% of organic producers and production by 2020 and 80% of organic and/or local products in collective catering by 2025, with a reduction by 50% of chemical products non organic agriculture. Even if the 230 members of the NGO who can use the Trademark are not all organic, they engage themselves to follow the principles of the charter and reach the objectives of BioVallée, in progressing towards better practices: divide by two energy consumption, using renewable energies, buying local, creating open-ended contract, using ethical funds…