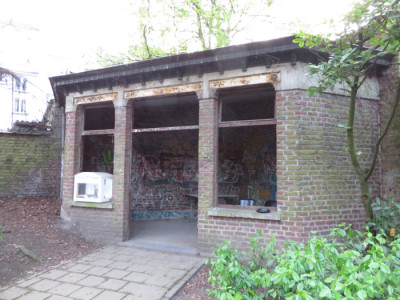 In August 2015, when I shyly shared my ideas about changes to be brought to the part with my fellows from the compost, I was scared that they would laugh at me. The opposite happened: they all agreed, and had lots of ideas about changes for beautifying the park – which gave the name to our movement: “Embellissons le parc Faider”. That day I created a Facebook group. In the following weeks, with a neighbour, we managed to get in contact with the City Council, a sustainable development officer came to meet us in the park, got to understand our expectations, and promised to relay our requests.

We were quite naïve, I suppose: our original thought was to make things change, yes, but in co-creation and co-decision with the City administration. We did launch a movement, but not the one we expected.

Indeed, the sustainable development officer organised an internal meeting where our requests were dealt with: accepted or rejected, without the possibility to negotiate. Especially where we asked for a communication and feedback mechanism with the administration… More than that, we waited a few months without any news or answers to our emails. Worst, the sustainable development officer left, as he was there for a maternity leave replacement…

We were left with no news about the next steps, nor contact person, we did not know what would happen to our requests, the validated as well as non-validated ones.

In March 2016, by chance, a colleague of mine informed me about meetings organised for local elected representatives to meet with the citizens. I went there to ask for a particular point that we got refused: installing a community garden in the park. It appeared that there was a newly elected Deputy Mayor with this competence. He totally approved our request. We chatted and it appeared we had done the same studies and that we had friends in common. Brussels is small and this easily happens. After this meeting, his head of cabinet went to meet us in the park and promised to make a few reparations. Some of these reparations took more than a year to happen… But then, we gained visibility. We also organised a Neighbours’ day – which the Deputy Mayor attended – , which made our group grow from… 2 to a couple more actives, a dozen of interested and quite quickly up to 100 on our Facebook group. By then I created a blog to centralise some important information about us and our activities.

There was a lot of energy and many ideas during the Neighbour’s day, a community was emerging…

Yet, the motivation dropped quickly: the enthusiasm that we had around a festive event did not follow. Also we did not have any news from the City Administration on the various reparations that were to take place. The physical interactions work best than virtual ones: for politicians and neighbours it is the same.

I learnt for myself that the original plan was welcomed by many neighbours, that they were happy to follow but not to lead. They did not have any comments nor suggestions. I started feeling lonely and lacking motivation to this whole process – to which, obviously, nobody forced me. 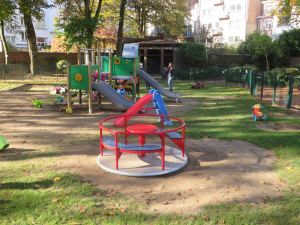 Phase 5: highlights of the year

After this general drop of energy, in September 2016, we managed to get a group of 5 motivated people to launch a community garden: we got the authorisation and funding to do so. A small group of citizens therefore became active around it. In parallel, we obtained a new playground for children – the previous one was destroyed and dangerous: families and children were highly enthusiastic about it. We organised a party to celebrate it – and the deputy mayor came.

We got new promises and hopes from the Deputy Mayor. We felt we started a real collaboration with the City Administration.

Yet, some important issues remains unsolved (reparation of fences, regular cleaning of the park, access to water, ….)… We were not receiving any news from the City Administration… I was suggested by the “educateurs de rue” (sort of “neighbourhood managers”) to write a registered letter to the City Council. That was the only possibility to make the politicians accountable – it was said to me. When the following meeting for local elected representatives to meet with the citizens was organised in March 2017, I made a speech for greater co-creation of the city, also asking for – at least – answers. It appeared the Deputy Mayor had never received my registered letter. It got lost in the administration. He then asked me why I had not written to him directly.

I learnt that communication with the City Administration is tricky and as its own modalities. That the politicians have the decision power and should be the ones I should be in contact with directly -not the adminsitration. At least in this City Council. But that I should meet them and not write to them if I wanted a clear information and follow-up.

Phase 7: where it becomes a political project

The following months saw unexpected changes in the movement. After the March meeting, we organised a “to attack!” gathering to decide what we would and could do without the approval of the City Administration: we did not want to wait anymore and we knew we were more effective and efficient. In parallel, a neighbour with a project in the street opposite to the park started to develop his own projects. He wanted to be associated by name to our movement but was doing his own activities against the ideas of the original movement – in values, scope and governance models. We had by then became a group of a dozen motivated people. Yet, he came to me to have a strong, personal and aggressive argument. Which got me scared.

My neighbours gave me a role of representative, leader, of the movement, whereas I thought I was merely “coordinating their ideas and projects”. They were doing many more things than me and I did not feel legitimate for that.

Phase 8: the question of institutionalisation

We discussed that with the Deputy Mayor who suggested we would set up an NGO to have more power. I shared the idea. Everybody was happy for me to set it up and run it, not to be responsible for it. But it is only at this point I realised the expectations I had given voice to while being the initiator of this project. I was naively thinking that I could launch an idea, coordinate it and that it would run smoothly. I should I have left this position earlier or taken a clear leading role.

There were many active citizens, doing many small and big things on a daily basis. Yet, what they wanted was an official voice and representative, somebody to fight for them.

I have now left. My neighbours understand it and support me. This has created a community against the opposing neighbour– and for some shared values. One of my neighbours took over the “communication and coordination” role, as she said there was too much to fight for. Now, I am curious to see how it is going to evolve.

This project took a lot of my energy. I had some stressful moments and got scared. What saved me emotionally was to take some distance from it via the analysis of what was going on for my own reflexions and work on city governance and collaboration between public authorities and city administrations. I am more than ever admirable for the active citizens and what they go through. As for the way city administrations can further collaborate with citizens, I have some further thoughts and ideas to share and experiment :). 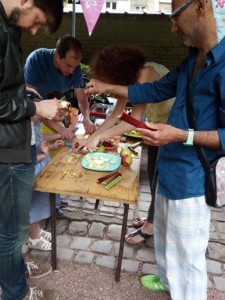 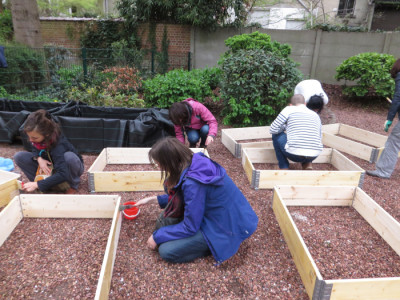 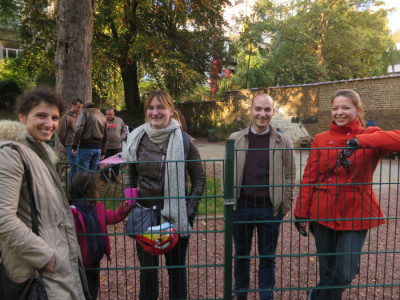