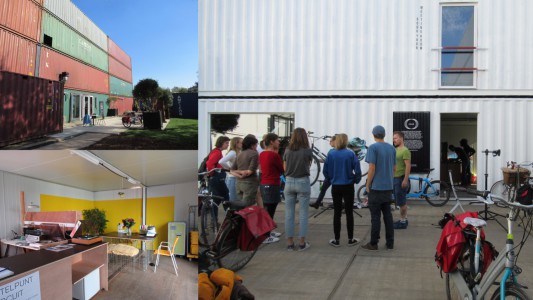 It has been years since I have been concerned with the issue of our consumption behaviour and practices. How can we make ourselves better consumer in order to enhance the resilience of our ecosystem? How (and who) can we provide support to our peers to this process?

For years, I had been following, what I would call a traditional public management/ psychological/ behavioural economics/ linear approach that suited me intellectually perfectly: I assumed that by identifying intervention logics and detailed analytical grids, we would identify causal chains and act at the right level. Conceptually speaking, it was very straightforward and easy to use. For years, I also used such approaches for evaluating European public policies. Yet, I realised that it was not enough. I could see the limits of such an approach in my own acts, in that of my surrounding and in public policies. At the same moment, via studies in Sciences, Technology and Society (STS), I opened up to a more systemic way of analysing and researching, that made me understand our behaviours and practices in a more consistent and holistic way. I became a strong proponent of a practice approach as opposed to psychosociological one. I experimented its operationalisation with the Brussels’ Regional Ministry of the environment in addressing food waste in households. Don’t get me wrong, I did not feel previous public policies were to be thrown away. But I kept on meeting civil servants frustrated about their (partially) unsuccessful policies and I felt they were missing out some of the point.
During one of the first discussions I had with Gabrielle Van Zoeren, Project manager of the Antwerp Circular South project, it appeared her conceptual approach had followed the reverse path of mind of mine: she was convinced that behavioural economics were the key to make people change their consumption behaviours. In particular, through nudging, people could easily change their behaviours and to see immediate benefits of those, in a smooth, yet forced way. I was sceptical when Gabrielle shared her enthusiasm about nudges that could establish a routine: “We are already structured around our working and lunch hours, why not establishing that we do our laundry at an exact time each week, especially if we save money?”

What about life flexibility and unexpected event? What about the fact that we are already constrained by so many obligations, do we already want to add some new ones? What about empowerment? What about deeper understanding of what makes people behave in a certain way? What about sustainability of such behaviours? What

I raised these questions with the partners. My own scepticism became a source of mutual learning, streamlining of approaches and further stress into co-creation with the partners and the beneficiaries (the citizens). Having dug into the project, I now see the reality that matters: it is that nudges are not taken in isolation and are strongly supported by qualitative analysis and that beneficiaries are fully involved. The partners have a strong potential in order to ensure that the project will be carried out very closely with  citizens, putting them at the heart of co-created solutions that will suit them in their reality: the knowledge of partners in direct contact with citizens through the cooperative Ecopower, the Pantopicon designers or De KringWinkel at the heart of the daily interaction with citizens will feed into the nudges that will be developed and implemented through the expertise and technicalities of the other partners, IMEC, VITO, Digipolis and EnergieID. I had to admit that it was worth the experimentation. And to me, that is the biggest value of this project.